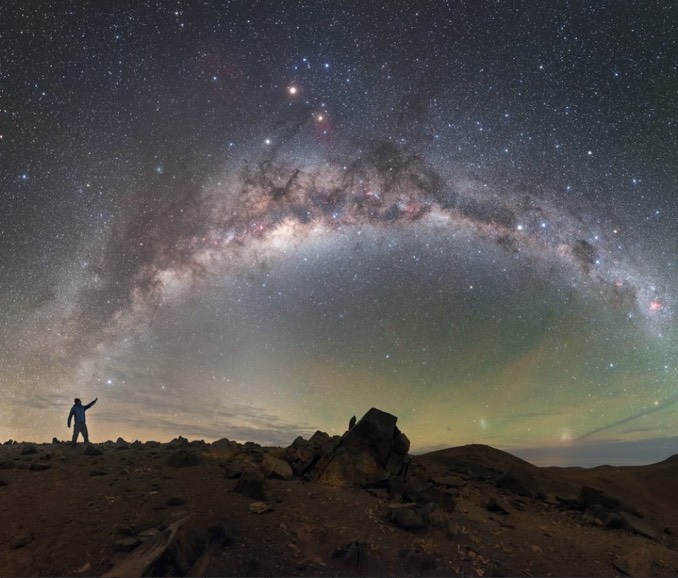 in Mind and Consciousness and Thought
3 Comments
0

If there is one thing the COVID-19 pandemic has reminded us, it is that we humans do not exercise ultimate power over nature. There are things invisible to our naked eye that can take us down, stealthily and steadily, and could some day spell doom for mankind.

Ironically, this COVID-19 virus has been declared our enemy; we are “at war” with it. Yet it is not at war with us. It loves us. It needs us to survive. It seizes every opportunity to settle within us.  Its sole purpose is to get into our bodies so it can replicate itself. If we die as a result, the virus is indifferent because we are its sustenance, its host, its means of extending its domain. Other than our role as a support for its propagation, it has no awareness of us. It does not wonder what becomes of us.

The difference between us and the virus, however, is that we can wonder, we do wonder. We know what we’re doing. Ours is not a blind, instinctive drive to survive. It is a thought-by-thought set of choices we make to guarantee our survival and choose who and what can live or die around us to make it so. It is a thought-by-thought set of decisions to decide what our best life should look like, to choose what we need and what we want, to decide how to spend our time on earth.

The virus, unintentionally, forced us to pause in March and April. For two months, human endeavor slowed to a crawl. The earth got a break from our ceaseless pounding and polluting. Things got quiet. Humanity stilled, and sweetness happened in the midst of all the sickness and death from the virus. People sang together from their balconies. People looked at others who were taking grave risks to care for the ill, and stood far apart, outside, to cheer for them, to shake tambourines, bang pots and pans, to let them know of our gratitude. Younger, more able people, reached out to make sure that older, less able neighbors had what they needed. People did simple together things at home. Many families grew closer. Yes, there were hardships for those who had to continue to work to maintain basic services; yes there was widespread illness from those the virus found; yes there was economic insecurity and fear and sickness and death. But the quiet got our attention. People began noticing stillness; appreciating quietude; listening to birdsongs; watching wild animals wander to explore suddenly serene urban places that had been too frightening to approach when we were out there. Many of us wondered if life would ever get back to the hectic, often thoughtless, pace we had previously kept, believing we had no choice because “that’s the way life is in this modern age.” Would we change? Had the virus inspired enough quietude for us to see new possibilities?

So the virus offered another lesson to us: Change motivated by fear is not real change. Even though we noticed and appreciated some of the differences that pausing human activity brought, we did not pause because it was a good thing, or because we wanted the planet to have a rest and the earth and everything on it to take a deep breath, or because it makes sense not to drive ourselves to the edge of exhaustion to keep the economy going. We paused because we were terrified that if we didn’t, we’d all get sick and die. As soon as we started to get antsy, and realize there were ways to be out in the world again and still possibly spare a lot of us from sickness and death, and we were told the economy would never be the same as it was again if we didn’t crank the engine to full speed right away, we were right back at it. We were grabbed by our own fears again, this time fear of the unknown, fear of having to create something new out of nothing, rather than reaching back and resurrecting the familiar, as dysfunctional as it might have been.

So now we face another lesson. The more of us the virus finds, the more it replicates. The more it replicates. the more of it there is to find even more of us. Eventually we will slow it and push it back from humanity, but it will not be erased from earth. It will be contained in the wild until it finds new hosts again. We know there are many others harbored in the wild that could emerge as time goes by, just as many have emerged in past millennia, from as early as we can find traces of humanoids. If we are paying attention, we know that ancient microbes and viruses are being released from the permafrost as the planet warms, or from beneath glacial snow as mountain glaciers shrink. At some level, we are aware that we have to come to peace with our place in nature.

So we now face the ultimate lesson of natural events that create human “tragedy” as they disrupt our ideas of how we want things to be. We may think of ourselves as the masters of the planet, as the most important beings in our planetary system, if not our Galaxy, or even the Universe. But we are shown, again and again, that the planet, the planetary system, the Galaxy, the Universe, vibrate harmoniously to universal laws. We don’t make those laws. We abide by them, whether we want to or not, whether we know it or not. As much as geology has taught us that there were seas where now there are mountains; that there were continents where now there are oceans; that there was ice where now there are flourishing trees and flowers; that there were species that once spread across the earth but have utterly disappeared; that there was life on earth long before we appeared… As much as anthropology has taught us that early humans cherished the land and thrived in harmony with it; that tribes of humans believed and some still do, that they are part of the natural order, not dominant within it, and believe that they are stewards of Mother Earth, not spoilers privileged to pillage her resources … As much as our own wisdom, when we access it, tells us that we are part the wholeness of the Universe, not greater than everything else … we forget, or turn our back, or wish it away, and try to prevail.

To me, during the 20 weeks (so far) I have lived in isolation, with only occasional forays to purchase groceries, or fill prescriptions, or keep doctor’s appointments, masked and gloved, keeping distance between myself and others, I have had time to reflect on all of this. What has occurred to me is that we must find our place in the architecture of the Creation, and appreciate it. We cannot mold events; we cannot thwart the constancy of change; we cannot willfully destroy things and disrupt the cycle of nature; we cannot subjugate living things  or the forces of the Universe to bend to our will. We are no more likely to survive as a species than the dinosaurs, or tiny organisms that have come and gone. We have a place, now, within the whole of creation. When we find love for what we have, appreciation for the allness of the amazing infinity of the glorious system in which our planet is barely a speck, and understanding that our gift to think our way through life is meant for each of us to find our place in it, not to displace whatever we don’t understand or don’t find useful to us, we will be at peace.

Only our ego, kicking wisdom, gratitude and connection to the side, can cripple our dance to the music of the spheres.